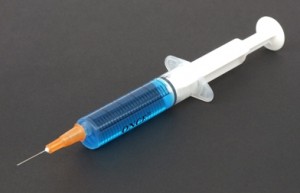 Jim EdwardsThere isn’t a single piece of medical literature alleging that Botox might cause autoimmune encephalitis, a particularly unpleasant form of brain damage (incontinence is just one symptom) — but Allergan (AGN) is currently defending three suits alleging just that.

Depending on your view, the suits are either breaking new ground to establish that Botox can travel so far from the site of the injection that it can trigger autoimmune encephalitis, or it’s about a pair of grasping plaintiffs’ lawyers who have made a career out of suing Allergan over Botox.

The first of three cases went to trial this week. Douglas M. Ray Jr., 65, alleges he was given three Botox injections by his doctor in 2007 to treat writers’ cramp. Then, Ray alleges, he experienced a brain injury:

… a severe acute immune reaction, resulting in a significant and catastrophic injury to the brain.

As a consequence of Mr. Ray’s Botox treatment, he has sustained a severe dementing encephalopathy, with devastating brain injury. Previously an articulate and high-functioning individual, he is now fully dependent on this wife and home nursing care givers for all activities of daily living. He cannot independently bath, shave or dress.

In its response to the case, Allergan says this is unheard of, and that even Ray’s expert witnesses can’t point to a single other case of Botox-induced autoimmune encephalitis:

There is not a single piece of medical or scientific literature in the world that discusses even a claimed autoimune reaction in the brain after the administration of Botox.

But there are two other lawsuits alleging that, and they’re both brought by Ray Chester and Stephen Bricker, who have filed many other cases against Allergan. Chester most famous won a 15 million dollar case on behalf of a woman who claimed Botox left her with double vision, breathing difficulty and continual pain in her hands and feet. The second case is Chyntia Van Den Boom vs. Allergan, which is set to come to trial later this year, and the third was Martha Chartier vs. Allergan. The Chartier case appears to have been voluntarily dismissed.

The plaintiffs may be relying on a 2009 FDA action which required Allergan to put a “black box” warning on Botox:

… highlighting the possibility of experiencing potentially life-threatening distant spread of toxin effect from the injection site after local injection.

Botulinum toxin, even in the “safe” version sold as Botox, is a highly toxic substance. The fact that it is injectable and can travel throughout the body is … well, you get the picture the lawyers are trying to paint. Whether Botox can reach all the way to a jury verdict against Allergan, however, is an open question.